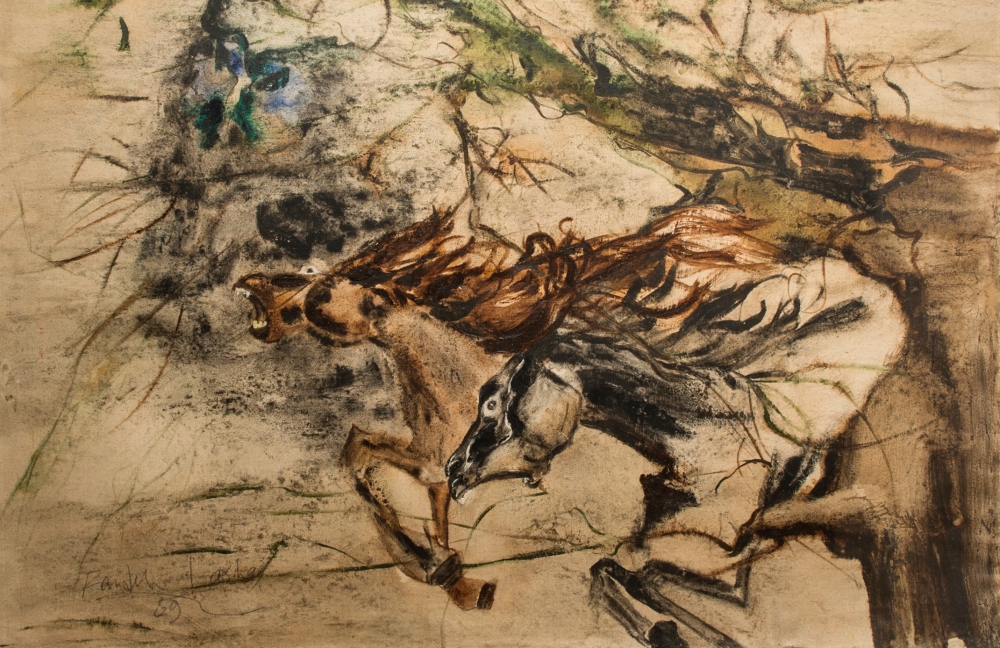 Farideh Lashai
Untitled (from the horses series), 1989
Oil on paper
47x62 cm
Courtesy of the estate of the artist

Lashai’s work often references iconic works of art, literature and film while engaging with the political and social conditions in Iran. The influence of her hometown of Lasha runs through many years of her work, as does the exposure, from an early age, to a profound sense of injustice, most concretely explored through democratically elected Prime Minister Mohammed Mosaddegh figuring in both her artwork and writing.

Presented in the heritage house of Bait Al Serkal, the exhibition features a large survey of paintings on canvas and paper, including the Pomegranates Series, the Trees Series and the Mosaddegh Series. Also included are Lashai’s crystal vases, a number of them with delicately engraved cypress trees, which she designed and carved during her time at Riedel Studios in Kufstein, Austria.

In later years, her practice increasingly focused on exploring combinations of painting and projected animations, anticipating explorations of surface, depth and narrative that feel urgent to our contemporary moment. A number of these works are presented in Sharjah, including Prelude to Alice in Wonderland, which features her ‘vulnerable rabbits’ inspired by her brother’s description of people during the Tehran bombardments of the Iraq-Iran War and When I Count, There are Only You… But When I Look, There is Only a Shadow, which takes its point of departure from Francisco Goya’s Los Desastres de Guerra (1810–20).

In Bait Al Serkal’s courtyard, the work Tyranny of Autumn, Not Every Tree Can Bear, is presented for the first time since showing in The Gardens of Iran: Ancient Wisdom, New Vision at the Tehran Museum of Contemporary Art (2004). In this work, wire mesh is used to create four cylindrical forms, within which small paintings of cypress leaves on Plexiglass are suspended. These four ‘trees’ reference the design of a traditional Persian garden – an earthly paradise represented as an enclose space defined by two intersecting streams. The cypress, a historic symbol of Iran’s ability to endure repeated invasions, along with accompanying inverted text, sheds light on the reality of this endurance and what still remains.

This exhibition was curated by Sharjah Art Foundation Director Hoor Al Qasimi. About Sharjah Art Foundation Since 2009 SAF has built on the history of cultural collaboration and exchange that began with the first Sharjah Biennial in 1993. Working with local and international partners, Sharjah Art Foundation creates opportunities for artists and artistic production through core initiatives that include Sharjah Biennial, the annual March Meeting, residencies, production grants, commissions, exhibitions, research, publications and a growing collection. Our education and public programmers focus on building recognition of the central role art can play in the life of a community by promoting public learning and a participatory approach to art.